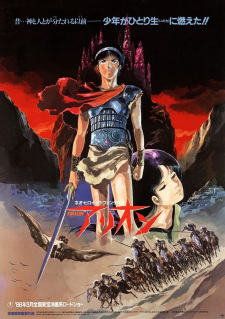 Plot Summary: In Thrace, Arion is taken from his mother Demeter by the god Hades. In the Underworld, Arion is trained to be a warrior. His training is driven by revenge: Arion was told that his mother's blindness was caused by Zeus and Zeus' death will remove the curse. Finally, Arion and Geedo (a huge ape-like creature who had become Arion's friend and companion) left the Underworld to find Zeus. Seneca, a small thief, makes off with Arion's sword and this leads Arion to his first encounter with the forces of Zeus, commanded by his daughter Athena. Arion is captured but is later set free by Lesfeena, Athena's mute serving girl. As Arion rejoins Geedo and Seneca (and worries about Lesfeena), the forces of Zeus and Poseidon face each other in battle. In the background sits the scheming Hades, and the calm Apollon who seems to have plans of his own..