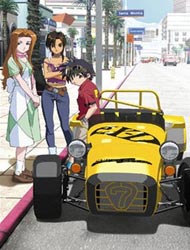 Plot Summary: After winning domestic preliminary round, Lisa, Lorna, and Soichi advance to ex-Driver world race competition held in Los Angeles as representative team from Japan. Like a bad omen, they encountered a reckless AI car the first night they arrived at Los Angeles. Although they successfully stopped the car, the local police department is not very happy about that and insists to examine their car overnight. However, the problem did not stop just there. The daughter of the United States team`s sponsor, Angela, has gone missing. Lorna realized that Angela was on the reckless AI car before. Soichi who guessed that Angel could be in danger then start looking for her. But Soichi got captured by a mysterious man, and he shocked to find Angela is also there. During the confinement inside a warehouse, Soichi finds out that apparently there is a connection between the series of incident and illegal gambling on the ex-Driver world race competition. Now Soichi must escape from the warehouse with Angela....